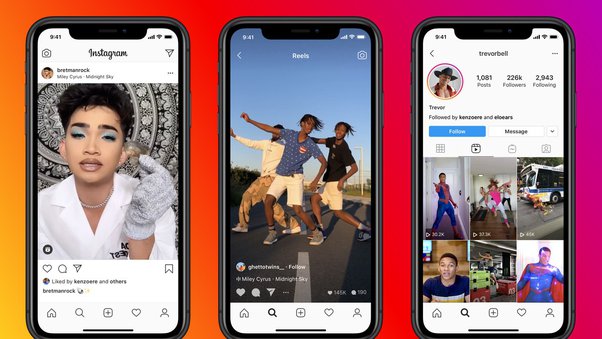 In an effort to compete with tiktok, Instagram Reels entered the market in 2020. But which should you use, which is superior, and does using both have any benefit? Or in the contest between Reels and tiktok, is there a certain winner? Find out by reading on.

In many ways, tiktok and Instagram Reels are quite similar. Both are platforms for short-form, vertical videos that let viewers explore, share, and communicate with one another. What they do and how they vary is listed below!

Split-screen, side-by-side video is one of the most apparent analogies when comparing tiktok with Reels. This allows you to record your video while simultaneously viewing another user’s material, allowing you to capture your own reactions to or contributions to the original footage. Tiktok provides its well-known Duets, while Instagram Reels has a function it calls Remixes that accomplishes the same goal.

Due to the fact that tiktok Duets was the first, it has the advantage since the interaction and editing choices are significantly wider. Reels Remixes are not always a terrible thing, however. With Instagram’s side-by-side video feature, you may still:

While Duets prevails in a clear-cut Instagram Reels vs. Tiktok fight, Remixes are interesting to check out. Remixing on Instagram Reels is a good substitute if you’re not a tiktok user and want something that has the buzzy, collaborative vibe of the Chinese social media juggernaut. It’s important to note that starting in January 2022, all Instagram videos, not only Reels, may be remixed.

If certain music is missing from Instagram’s library, it is likely due to copyright or licensing concerns. Even though Instagram’s search feature is excellent, not all songs are available via it. Before including the music in your Reel, you may manually insert the song into a clip if you want to incorporate a particular track that isn’t offered in the software. You are free to use it without facing takedown requests, copyright disputes, or other legal issues as long as you have the appropriate license and/or permission to use it in your material.

Instagram Reels are brief, impactful bursts of video. They were launched with a 15-second time constraint and have a maximum run time of 60 seconds.

Only 15-second videos could be uploaded to tiktok before. Soon films lasting 60 seconds and then three minutes were added. Your tiktok of Addison Rae may now include 10 minutes of lip-syncing, cake-baking, poor dancing, and other random activities.

Because of how easy it is to post content on tiktok, the site has an advantage over short-form viral videos. However, Instagram’s primary video capability permits hour-long files if you desire really lengthy recordings. However, Reels are only spinning for one minute right now.

In the Reels vs. Tiktok debate, tiktok has one secret weapon: stitching. The ability to include particular cuts of other users’ films and sew them into new ones is exclusive to tiktok.

Two videos may be shown side by side in a tiktok Duet or Instagram Reel Remix. On tiktok, there is a unique feature called Stitch that enables five seconds of another person’s video to completely fill the screen. You could always make the film in a third-party video editing tool and publish it as a Reel if you have permission to use someone else’s footage, but Instagram is presently unable to accomplish this in-app.

On tiktok, you may discover sponsored videos and paid adverts that are tailored to the user feeds. There isn’t any advertising on Instagram Reels, which is often seen as a perk for viewers! However, putting a “sponsored” tag on an Instagram Reel is simple if you’re working on a brand collaboration.

Both tiktok and Reels get high marks for their user-activated digital health initiatives. The Wellness Hub on tiktok links users to the app’s physical and mental health services. The Take a Break feature on Instagram, and therefore Reels, encourages you to put your phone down, think, relax, and do something else once you’ve spent a specific amount of time on Instagram.

The screen time management application for tiktok, which has been in development for years, functions similarly to Take a Break. There was no official Screen Time Management feature back then, but it’s evident that users’ well-being has been high on tiktok’s agenda for a while. In 2020, users were targeted (seemingly at random) with videos stating, “Hold on, you’ve been scrolling for much too long already.”

It is unlikely. While Instagram is a well-known player and a component of Meta, tiktok excels in what it does. When it comes to short-form snapshots, many influencers like tiktok’s streamlined, integrated experience, while casual users adore its lightning-fast, never-ending scroll feature. Reels won’t likely take the place of tiktok very soon since they both have to put up with each other’s company for now.

Although it’s difficult to define, many users like tiktok’s more natural vibe. Due to a partnership between the platform and Shopify, in-app transactions are very seamless.

You don’t have the same options and flexibility on Reels as you have on the rest of Instagram. As a result, although the main Instagram platform is great overall, Reels can’t match tiktok in terms of simplicity.

More than one billion people use tiktok and Instagram each month, yet Instagram is used for more than simply Reels. Tiktok’s mainstay is that kind of brief, snappy material, while Reels is only a more modest Instagram feature. Tiktok is increasingly well-known for this kind of film as a result.

The majority of videos that you see on social media sites like Facebook, Instagram, and Twitter are often downloaded directly from tiktok. On tiktok, the number of followers doesn’t really matter; all it takes is for someone to notice your video and share it.

Virality is still conceivable but less common on Instagram Reels. In contrast to tiktok, which can make anybody an overnight success, Reels often concentrate on preserving and expanding an existing following.

Reels or tiktok, which is superior?

The Reels vs. Tiktok argument hinges on your goals. Tiktok is a fast, efficient, and adaptable platform that can help your content get in front of massive audiences. The greatest candidates for Instagram Reels are content providers with a sizable audience since it is a bit more carefully managed. In order to take advantage of the many purposes, it is worthwhile for creators to investigate both platforms.

How to Get More Sales with SEO

Why You Should Choose an Experienced SEO Company